I'm taking a break from cancer to bring you this: I found a way to get Julia to eat her vegetables! Exciting stuff, I know. But as if I don't have enough on my plate, I lay awake at night worrying she's going to get scurvy because of a lack of nutrition. And it's not that she is eating bad things -- in fact she won't even touch a cookie or a brownie or anything sweet, oh no -- it's that she eats NOTHING. I often say she subsists on Goldfish crackers and air. The list of foods she will consume has dwindled down to this: waffles, yogurt, noodles, chicken, English muffin pizzas, most fruit and sometimes corn.


So I got Jessica Seinfeld's book "Deceptively Delicious." The concept is basically pureeing fruits and vegetables and hiding them in foods kids will eat. So I decided to give it a go by making her
buttered noodles with pureed yellow squash. It was pretty simple. 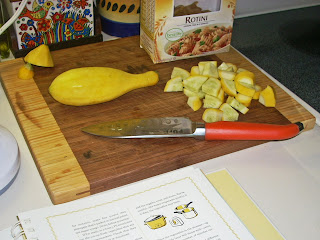 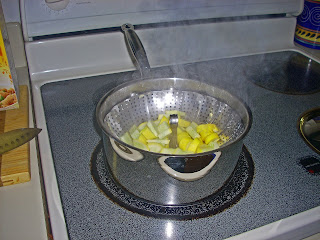 Puree in a mini food processor: 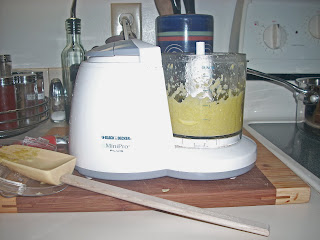 It looked just like regular noodles. (Once upon a time she loved peas, so I always put them in with the noodles in hopes that she will decide she likes them again...) 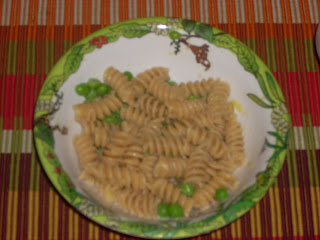 And the taste test: 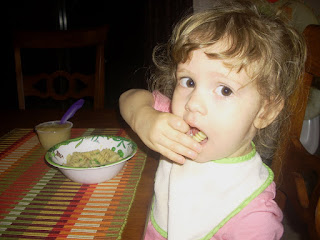 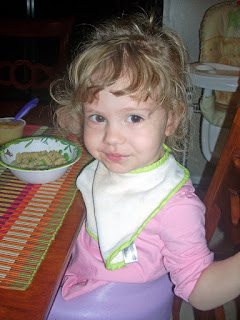 It was a success! She ate the whole bowl. I am so excited. Next week I'm going to puree some spinach and stick it in the sauce on the pizzas. Jessica Seinfeld even makes brownies with spinach puree. I'm not sure I'm ready to go to that level. But I feel so much better knowing Julia's getting some veggies in her. I may have to try this trick on Mike as well. Don't tell....
Posted by Carrie at 10:23 PM

You're a smart mom!

"The list of foods she will consume has dwindled down to this: waffles, yogurt, noodles, chicken, English muffin pizzas, most fruit and sometimes corn."

Whoa. Julia and I have the same diet.