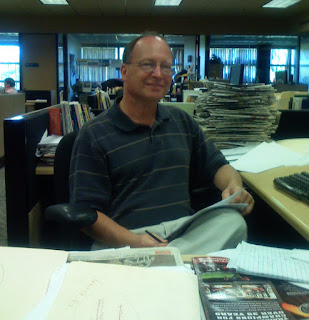 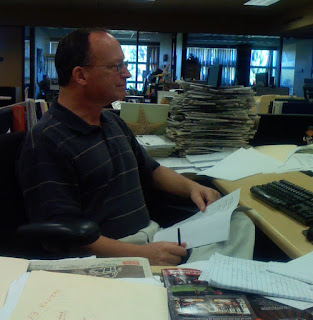 It's back! Mike debuted his new do at work today, and I have to tell you that when I saw him walk in, my heart skipped a little beat...

I was so excited for him to be able to return to some normalcy. The first round of chemo drugs caused his hair to fall out, and if that wasn't bad enough, another drug caused a rash on his head that left some scarring. He's had to wear a hat since July.

But the hair started growing back. It's black (with a hint of gray) AND ... I think if it grew out some, it would be CURLY. There's definitely a wave going on.

I remember how bad Mike felt when his hair started coming out in his comb, and then later in clumps in the shower. And I remember how it broke my heart to have to clean the pillow with a lint brush every morning. It's hard enough having to fight cancer but doing it when you have to face the world with a different look makes it worse.

So I just feel like this is little victory for him. A kick in cancer's teeth.
Posted by Carrie at 3:13 PM

I remember the feeling. There's nothing like having your hair come out. It actually hurts. But it was a great feeling when it came back in and yes, my hair came back in dark and gray and curly! I had never had curly hair before. Hooray for Mike's progress. I am so happy for both of you. You're in my prayers daily. Hope to see you soon. Can't wait to see Julia again.

Awesome. Just like Stadelman. ;0 But what about the white eyebrow? Give us a closeup, Miz DeMille!

who is that young go-getter? looking good, mikey!